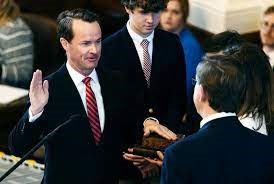 The legislature gaveled in at noon on Tuesday.  The day was a typical opening day, with the Capitol full of family and constituents that had come in town to watch the proceedings.  In the most eventful part of the day, Republican Dade Phelan was chosen by his colleagues to lead the House for a 2nd term as Speaker.  Phelan was challenged by fellow Republican Tony Tinderholt of Arlington, who claimed Phelan was not willing to or capable of passing Republican party priorities this session, and is too accommodating to Democratic members in the chamber.  Ultimately, Phelan defeated Tinderholt by a 145-3 vote.  Tinderholt could only garner the support of two other members – Republicans Bryan Slaton of Royce City and freshman Nate Schatzline of Tarrant County.  Tinderholt and his two supporters argued that Phelan should prohibit Democrats from committee chairmanships and focus more on party priorities. Phelan, even in his opening statement in his acceptance speech, reiterated his priorities of  preserving the tradition of the Texas House and avoiding the division that cripples the United States Congress. 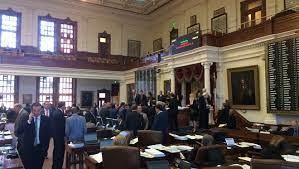 Yesterday, the House adopted the rules under which they will operate this session.  Tinderholt and other ultra conservative members presented amendments to prohibit any Democrat from chairing a committee in the House. After lengthy debate, all of the relative proposals were eventually defeated through a series of parliamentary maneuvers that declared the proposals out of order and not germane to the substantive rules of the House.  One major part of the rules package that was adopted focused on members that break quorum in an effort to stop all activities of the House.  This was in response to the Democratic exodus last summer during the special sessions in an effort to delay a vote on a package of election reform and voting rights bills.  The rules now stipulate that any member leaving the chamber for the purpose of impeding House activity will face a fine of $500 a day and will have to reimburse the state for any costs associated with attempts to restore a quorum.  The rules package was finally passed by a vote of 123-19.

Members of the Texas Senate drew lots yesterday to determine length of current terms.  Senators are elected to four year terms, but due to redistricting, all 31 members had to stand for reelection last year since they all had to run in new districts.  To ensure not all 31 members are up for reelection at one time, the terms are staggered.  Therefore, a drawing was determined to see which of the lucky 16 could enjoy a four year term and which have to run again in two years.  Of note, three of the five freshman drew two year terms, including Democrat Morgan LaMantia of McAllen.  She won what was the only truly contested Senate race in 2022, as Republicans are targeting the Rio Grande Valley seat for takeover.  LaMantia won her election in 2022 by less than 800 votes, and will certainly see substantial opposition in the 2024 election cycle. 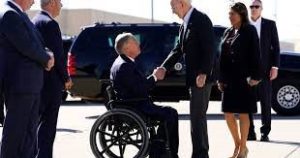 President Biden was in El Paso on Sunday making his first visit to the US/Mexico border as President.  The trip came amid growing criticism of Biden from Republican lawmakers for not making time to visit the border region earlier in his Presidency.  Biden was met at the airport by Gov. Abbott, who handed him a letter demanding he increase federal border enhancement activities.  During the visit, Biden witnessed border operations at the Bridge of the Americas Port of Entry, which is the busiest port in El Paso.  He also visited an El Paso migrant services center, meeting with community and religious leaders who manage the service centers.  In making remarks during his visit, Biden in turn blamed Republicans in Congress for not doing more to pass legislation to address an overall border enforcement and immigration plan.  Title 42 – the pandemic era policy that allowed federal officials to immediately expel anyone seeking political asylum – remains in place.  And the Biden administration has said they will expand the policy to focus on people from countries that are now making up the majority of migrants at this time – Nicaragua, Cuba, Haiti, and Venezuela.  However, the administration has said that they will now begin to accept up to 30,000 migrants per month from those countries. 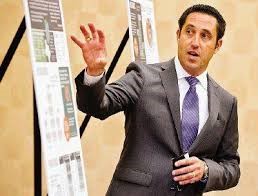 Texas will enter the 2023 legislative session with a record $32.7 billion budget surplus.  Comptroller Glenn Hegar made the announcement on Monday, as lawmakers planned to reconvene on Tuesday.  Hegar’s biennial revenue estimate shows that budget writers will have nearly $189 billion in state dollars to spend when they write the state’s two-year budget this session.  That figure is 26% more than was available to spend during last session.  Hegar credited massive spikes in sales tax revenue as the main reason for the increased revenue.  Sales tax collections account for 53% of the state’s revenue.

One bit of caution from Hegar. He said the state is expected to go through a mild recession this year, so he encouraged lawmakers to spend the surplus wisely and on one-time investments, rather than programs that require ongoing appropriations from the state.  Lt. Governor Dan Patrick has been the most vocal about how to spend the surplus funds, saying the state should save some of the money while also spending on property tax relief.

The only thing that legislature is required to do when they convene for the regular session is pass a two-year, balanced budget. 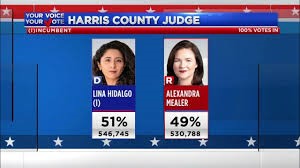 Two months after she conceded, the Republican who was defeated in the race for Harris County Judge has filed a lawsuit challenging the results of the 2022 election.  Alexandra del Moral Mealer is one of 12 Republicans in Harris County to contest the results of the election.  She lost the race to incumbent Democrat Lina Hidalgo by roughly 16,000 votes.  In her statement announcing the challenge, Mealer said this was done in response to a report issued by the Harris County Elections Administrator that said the county’s election systems were in need of immediate upgrades.  Harris County has been heavily criticized for how the midterm elections were handled, with multiple reports of staffing shortages and voting machine failures.  Mealer is seeking to either be declared the winner, or to have a new election.  Once the lawsuit is referred to a judge, the process of the challenge will begin.

On Monday, the eve of the beginning of the regular session, House Republicans met to select their new leadership team.  The caucus voted Rep. Craig Goldman of Fort Worth as the new chair.  Goldman succeeds Rep. Jim Murphy of Houston who did not seek reelection in 2022.  Rep. Tom Oliverson of Houston was selected as Vice-Chair of the caucus.

The Texas Senate will bar reporters from the Senate floor for the second session in a row.  In the 2021 session, reporters were moved from their table near the front of the chamber to the gallery as a COVID precaution.  Reporters were informed last week through an email sent by the Secretary of the Senate that press access to the chamber will not change for 2023.  The Texas Press Association and several of the state’s newspapers have criticized the move, saying that this places unprecedented restrictions on journalists, and has asked Senate leadership to reconsider the policy.  That is highly unlikely.  The House will continue to allow reporters in designated areas on the House floor.

Senator Ted Cruz has called for the resignation of US Transportation Secretary Pete Buttigieg.  After the latest mishap that grounded planes nationwide yesterday for 90 minutes, Cruz is questioning Buttigieg’s ability to do the job.  Cruz was one of 13 Republican Senators to oppose his confirmation.  Buttigieg was already under an intense amount of scrutiny for not doing enough to prevent and ultimately straighten out the disaster over the holidays that saw the cancellation of nearly 17,000 flights – most by Southwest Airlines. Cruz and other distractors claim the dysfunction of the Transportation Department is putting the entire air transportation system at risk.

The House and Senate will meet today at 11AM in a joint session to canvass the votes from the 2022 election.  After that, both will adjourn until Tuesday of next week, when they will again meet in joint session for inaugural ceremonies.  Governor Greg Abbott and Lt. Governor Dan Patrick will be sworn in at 11AM on Tuesday, January 17th on the north steps of the Capitol.  The ceremony is open to the public.  After the swearing in, there will be a “Taste of Texas” lunch on the Capitol grounds which will include BBQ, Mexican food, steaks, catfish, and seafood.  The luncheon is also open to the public for a cost of $10.

For tickets to the luncheon and all information related to the inauguration, you can visit https://2023tic.com

When lawmakers return on Tuesday, there will be 133 days left in the session.